So, as a way to explore different ways to innovate, Korean Broadcast System (KBS) came to the hacker space that Ron helped to found.  Tinkermill is a spot where anyone can come to invent, work, build, weld, compute, or socialize.  It’s one of the biggest hacker spaces in the country.  Tinkermill has grown quickly and exponentially since it started last year, and its impressive climb has caught the attention of other cultures and countries.

This is how I found myself in the middle of a warehouse-type space, surrounded by extremely smart people (read: geeks, inventors, entrepreneurs, artists, and other such geniuses), as well as a handful of Korean-speaking cameramen, interviewers, and an adorable little lady who is — apparently — the “Walter Cronkite” of South Korea.  Umm…cool!  The crew was filming for a broadcast that will be shown 200 or more times on Korean television in order to attempt to bring the model of an open source American hacker space into Korean culture.  Apparently, we’ll be famous in Korea after it starts to air.

I don’t have a solid spot in Tinkermill, mostly because I don’t know exactly what my interests are when it comes to tangible creations that can be held in your hand or observed on a screen.  My science is nutrition, which is based in studies that I do not have the backing — nor the location or desire — to create.  My understanding of nutrition is based on the knowledge I gained in school about critically eyeing and judging new research, as well as my knowledge of the human body and its inner workings.  My art is dance, which can move and touch other people deeply, but which does not easily lend itself to a warehouse built for tangible creation.

So, I wandered around, conversing with others, and watching them do what they do.  What I found interesting, funny, and fascinating, was that the little camera crew tended to follow me from person to person!  I wasn’t DOING anything; I was just talking!  But in the process of being filmed constantly by the Koreans, I learned about the nature of art from a lawyer, about a new way to mix music from a successful business man, and about what machined bronze looks like next to regular bronze from my mathematician husband.

So, maybe I’ll add a new hobby to this blog…once I figure out what it is.  In the meantime, if you’re in Korea, check out Tinkermill on KBS! 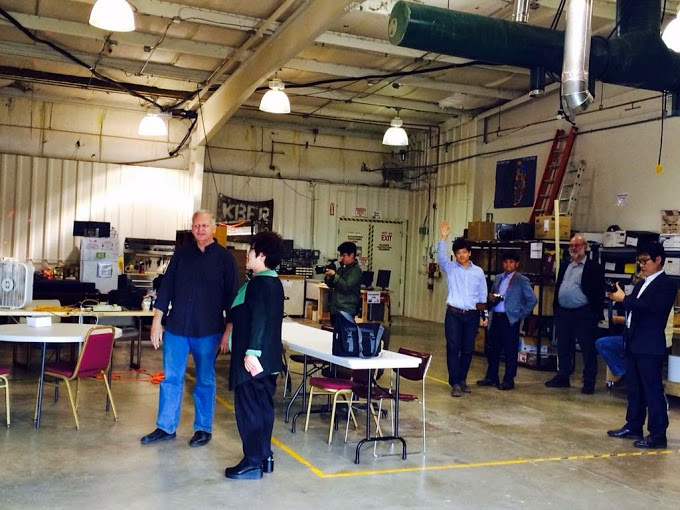 Tinkermill and KBS. Thanks to Scott Converse for the shot.