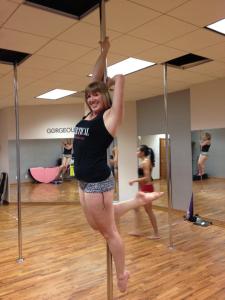 I love this pose! It’s called Figurehead, and I nailed it on the first try. Very exciting. Thank you Nina for getting such a great shot!

I have missed about a week and a half of Pole due to Mordorial Day.  I was worried I’d lost valuable pole strength, but apparently that’s not the case.  I think that sometimes I need to mentally process a move over and over before I can physically achieve it.  That’s how it’s been with a climb to inversion and Marley.

Evil, evil Marley.  Marley causes tremendous pain to the back of the knee because that is the only body part making contact with the pole.  It has eluded me for some time now.  It requires a hold on the back of the leg, followed by a removal of both hands from the pole. Finally, the lower hand comes around to meet the lower ankle to hang. I got Flying Cupid, which is Marley with one leg still straight.  Even that was agony. 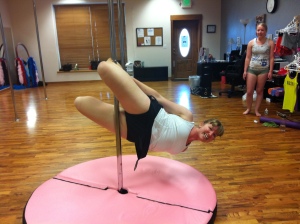 Here is Marley for the first time! If you look closely, you will see that’s not a smile, but a grimace of pain. Melanie found it hilarious, and frankly, so do I.

Normally if there was a move that caused so much pain that I wasn’t really into (Oooohhh!!!  Holly Drop!  That’s pretty, I MUST use it!!!), I would pretty much ignore it.  But no.  Marley is required to move into the next level at Vertical Fusion: Advanced 1.  I want it.  It will be mine; oh yes, it will be mine.  And every move required is something I am either quite practiced at, or that I can muscle through on sheer strength.  Except for Marley.

Mel and Nina had good advice for me yesterday; practice it on both sides every single time you’re in the studio.  Even if no one else is working on it, I must get on that pole and torture the backs of my poor knees.  So, that’s what I did yesterday and today.  And today?  It happened.  It wasn’t just a product of two days’ worth of work, no.  I’ve been thinking about Marley since the first time I saw it in December.  Once again, not one of those moves I simply HAD to learn or else, but a pretty intimidating move that I honestly didn’t believe I’d ever get.  Ha.  Dangle a new level in front of my face and see what stops me!

Pretty pretty Outside Leg Hang! I was working on this on spin pole today and it is damn impressive.

I have been following Nina’s lead as well in trying to get photographic proof of awesome moves achieved.  She’s right when she says that if you get a move the first time, you damn well better have someone get a picture because there’s no guarantee you’ll get it the second time!  And once you’ve landed a move, you’re pretty excited to see it on camera, so it’s really disappointing if you can’t get it again in the same day.

Today Melanie, Babydoll, and I worked on some spin pole stuff.  I love spin pole, but have been neglecting it because my next two performances are going to be done entirely on static.  There’s a spin that’s been killing me lately: Pretzel Spin.  Here’s an address for another performer doing the spin: http://www.youtube.com/watch?v=tDhDe4-ntO4  You can stop watching after 13 seconds (unless you’re into tutorials, then by all means.)  The way I’ve learned it is to bring that back foot up to the pole as well, so you really look like a pretzel.  It’s a tough one for obvious reasons, but especially because it requires a lot of control on spin pole, and a lot of flexibility in the shoulder area.  I’ve been struggling with my hip and leg placement for this one, and was getting really frustrated.  Then today it clicked and I was able to push my hips back just far enough to get twisted around the pole!  Very exciting, as it’s a gorgeous move for spin pole.

I am getting tremendously amped up for my performance at Ragnarok.   No more details as of yet, but it’s starting to look like something pretty amazing.  I ran through parts of it today at the studio, and I think if I hadn’t been totally wiped from Power Hour, I would have been able to go all the way through it.  I’ll have to practice again once I’m fresh.

And finally, speaking of Power Hour, I have a huge announcement.  I am teaching for Vertical Fusion now!  I teach Power Hour and will soon be teaching Intro/Beginner to Pole classes.  My style is extremely carefree (well, everyone’s is, really), but I make a lot of jokes and keep it pretty lighthearted.  I think this is going to be one more great experience in a long line of amazing ones in my life of Pole.

2 thoughts on “Fast turnaround to the next level!”