I freakin’ love Halloween.  Seriously; there’s so much about it to love.  No gift-giving pressure, no expectations.  Just a chance to dress 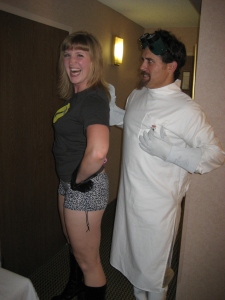 Here are our costumes. If you haven't seen "Dr. Horrible's Sing-A-Long Blog", do me a favor and see it.

up and act silly.  Boulder Spirals held their Halloween Pole Jam on Friday; Ron and I went dressed as Dr. Horrible and Captain Hammer.  It was so much fun!  We got to hang out and get to know people from the studio a little better, I got to dance on the poles as much as I pleased, and Ron even got a chance to show off some of his moves!  He was one of two guys who got on the poles; he climbed to the top and did some pretty cool tricks on the way down, all to cheers.  I was quite proud of him.

"I hear you get to do the weird stuff the second time."

I went to Triple Threat the Monday before (combined chair and pole dancing.)  There was a special vibe about it.  Melanie had a great routine put together and we all caught on quickly and easily.  We were so impressed with ourselves that we decided to do a flash mob of the dance at the party.  It was so much fun!  It was a good way to open up the poles to dancing for everyone and we all got quite a thrill from performing (at least I know I did.)

On Saturday we went to a party in Denver with a couple of other friends.  When I went to check out the dance floor at the club where the party was held, I couldn’t believe my eyes: there was a pole right in the middle!  Not only that, but on the second floor of the club there was another pole.  This one was movable and temporary, but worked just fine.  It was so much fun to intersperse pole dancing with socializing.  A lot of women gave it a try too, which was great to see.  I love it when people can just let go and have a good time.

2 thoughts on “Poles and Parties”